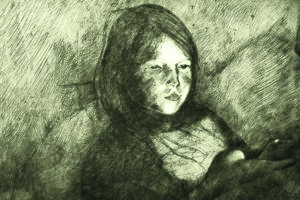 This year, the Tallinn Print Triennial marked its 50th anniversary with a programme of exhibitions and films, and two prizes were awarded at the close of the event.

From 2 June to 15 July, the Contemporary Art Museum of Estonia (EKKM) hosted the main exhibition of the triennial, Cloudbusters: Intensity vs. Intention (curated by Margit Säde). The exhibition was accompanied by a film programme at Sõprus cinema.
From 20 April to 26 August, Kumu Art Museum was the venue for an exhibition on the history of the triennial, Puzzling Over the Labyrinth: 50 Years of the Tallinn Print Triennial (curated by Elnara Taidre and Eha Komissarov), in the context of which a book on the triennial’s history was published – In the footprints of the Tallinn Print Triennial (edited by Elnara Taidre).
From 21 June to 5 August, Tallinn City Gallery presented a solo exhibition of the Grand Prix winner from the previous triennial, Viktorija Rybakova’s Skinship.

Due to the special format of this year’s anniversary triennial, two prizes were awarded – the City of Tallinn Prize and the Art Museum of Estonia Prize.

The main prize – the City of Tallinn Prize – supported by the city, went to Andrea Büttner, who appeared at the main triennial exhibition held at EKKM. The decision was made by the council of the Tallinn Print Triennial Foundation, consisting of Kadri Karro, Eve Kask, Eha Komissarov, Eva Näripea and Elnara Taidre. It will mean that Büttner’s winning work, Ramp (2) (2014), will be placed in the collection of the Art Museum of Estonia and she will be featured with a solo exhibition in the next triennial, in 2021.

The Art Museum of Estonia Prize was awarded to Lilli-Krõõt Repnau for the works on display at the main exhibition at EKKM, Girl in Smartphone Light (2017) and Boy with a Smartphone and Pillow (2017).

Andrea Büttner, who lives and works in Berlin and London, is an interdisciplinary artist whose discreet dialogues on socially sensitive topics often are brought to bear through printed images, contributing to the discussion on the possibilities of graphic arts and reproducible images participating in the discourse in the context of contemporary art and culture. Büttner’s works can be seen in such prestigious collections as Museum Ludwig, Tate Modern, MoMA and others; she was one of the nominees for the Turner Prize in 2017.

Lilli-Krõõt Repnau is one of the Estonian graphic artists who have been strongly influenced by the digital turn yet continues her searches in the field of traditional print making as well. Using etching technique – prominent in the Estonian graphic art of the second half of the 20th century – she deals with a modern set of problems, such as how technology is affecting children and even how digital society imagines childhood as such.