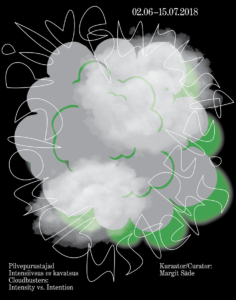 The international exhibition Cloudbusters: Intensity vs. Intention, curated by Margit Säde, examines the invisible connections and interactions between the human psyche and technology, drawing on the metaphor of both natural and data processing clouds. Considering the dearth of ambivalence in contemporary society, the exhibition focuses on various personal universes, which provide different alternatives for ‘a transformative digital society’, i.e. life in the ‘cloud’.

What happens when the world will not fit onto our keyboard or into an existing algorithm? In the given system, all kinds of deviations and unthinkable ideas are often either deplored, ridiculed, pathologised, ignored or simply forgotten. The exhibition has borrowed its title from the pseudo-scientific invention of Wilhelm Reich, the Austrian psychoanalyst – the so-called cloudbuster, with which Reich conducted dozens of healing ‘cosmic orgone energy’ experiments in the 1950s; and as such deals with experiences and sensations that are not usually associated with the perception of reality but rather exist on the periphery of reality.

For Christoph Keller, the image of the cloudbuster primarily denotes the comprehensive examination of the body and the spirit under today’s rational conditions, and the expanded comprehension of art as the histories that have been omitted from the dominant narrative. Just like Tamar Guimarães and Kaspar Akhøj examine the connections between various traumatic and ecstatic states and modernity based on spiritual mediums, so too, Javier Téllez’s film Caligari and the Somnambulist gives a voice to those who are marginalised and excluded, and thereby disputes the understanding of normality and pathology. The abstract form of Bianka Rolando’s works enables one to escape regulated mindsets and think about enslavement on multiple levels beyond linguistic boundaries. The idea of humankind’s progress is also challenged by Sam Porritt, who creates tragicomic situations emerging from empowerment and the lack of it. Pavel Pepperstein and Marje Taska focus on the relations of new technologies, society and mythological beliefs with the possible futures of humankind. Suzanne Treister’s projects are comprised of fantastic reinterpretations of history that examine the impact of secret and invisible forces – be they corporate, military or paranormal – on the world. Andrea Büttner records the invisible patterns left by users’ fingers on the screens of their smartphones and transforms them into a visible series of prints, thereby manifesting our physical and spiritual dependence on screens and touching them. Lilli-Krõõt Repnau also examines a person, in this case a child, in the light of a smartphone, and employs the old-fashioned technique of etching to do so.

The colour silkscreens of American artist, nun and teacher Sister Mary Corita combine advertising images and slogans with Bible verses and philosophical quotations. When organising various ceremonies and unifying rituals with her students, Sister Mary Corita’s work focused on celebrating communal life. Richard John Jones deals with sexual narratives, queer-friendliness and the meeting places of subcultures on the periphery of society. He works primarily in performance and its documentation, combined with textiles, printing techniques and handicraft.

Karl Larsson and Marco Hellberg, Paolo de Cantos, as well as Klaus Lutz all deal, in one way or another, with undomesticated alphabets – with the presumption of something extralinguistic or an uncategorised part of human communication. Babi Badalov is interested in the ability of language to unite and divide people, in multicultural situations where languages and their visual forms start to resonate and all kinds of boundaries start to blur. The creation of imaginary spaces also interested Swiss writer Robert Walser, who, in his later creative period, wrote his texts on random pieces of paper and compressed the writing in order to make it disappear and thereby become visibly invisible. In his text and performance I’m that angel Tyler Coburn asks: ‘What to do with a body when we’re living on air – how thin, how obscure does it have to become?’

By combining the optimism of will with the pessimism of intellect, and intensity with intention, the exhibition encourages us to question the directives and norms of a dominant narrative. Or like the philosopher Donna Haraway argues in the film Story Telling for Earthly Survival: How to make a weak story stronger and strong story weaker? Whether we are dealing with celebrating life, our escapist personal universes, a somnambulant rebellion or carefully considered resistance, all the works exhibited at the exhibition reflect various forms of contemporary ascetic and ecstatic expression. All the author’s positions are united by searches for a more caring and human-centred society.

The exhibition at EKKM will run from 2 June to 15 July (Tue-Sun 12-7 pm). A weekly film programme will run at Sõprus throughout the duration of the exhibition. More information available here.